The evening of Dan Collins’ retirement party, the Professional Accounting Council (PAC) and a few extra guests toasted to his long and accomplished career. Of note, not one of the speakers relied on Collins’ numerous awards as proof of greatness.

There was hardly a mention of his Hancher-Finkbine Faculty Medallion, FARS Lifetime Achievement Award, multiple teaching and  mentorship awards from Tippie, nor his being named the Outstanding Accounting Alumnus of 2022.

Instead, there were stories.

He lent a hand at a new faculty member’s house when their basement flooded. He was such a handsome and well-dressed young professor. He took the time to make copious notes on Ph.D. students’ papers—enough to fill all the margins. He talked over Zoom to a student struggling through their first semester of accounting, after which they referred to him as “that dear Dan Collins.”

And it was fitting. His legacy is so much more than any trophy case could hold.

It’s hard to overstate his influence in the college. At the Tippie College of Business, Collins is ever-present, even though he now only occasionally stops by his emeritus faculty office. To fully convey his impact, we would need more space than this—or any other— magazine allows, so we’ll concentrate on three important programs that either wouldn’t exist or wouldn’t be the same without his advocacy and involvement.

The Accounting Writing and Communications Program

In the late 1990s, Dan Collins (BBA68/PhD73) was the accounting department executive officer. He heard from the board and alumni in industry that accounting graduates were great at accounting—but there was a catch. They weren’t so great at communicating.

You could have all the data and know-how in the world, but if you couldn’t communicate it via executive summary for your boss or in an email to your client, what good did it do? And it wasn’t just Iowa grads. It was an industry-wide problem.

Where others saw a crisis, Collins saw an opportunity. He rallied the board and donors and the Accounting Writing Program was piloted the fall semester of 1998.

“I first met Dan when he was interviewing me to coordinate the fledgling Accounting Writing Program,” remembers Pam Bourjaily, who was the first director of the program and is now the director of Tippie’s Frank Business Communications Center. “His enthusiasm for what was then little more than a good idea and a website was compelling and, it turns out, contagious. Dan embodies the power of positivity—he makes the ‘yes’ happen.”

Over the last twenty-four years, the program has grown its reach (thanks in part to funding by Bob Nicholls (BBA80)) to serve around 300 undergraduate and master’s students any given semester, and expanded its mission to include speaking and data visualization in addition to writing. Currently, all accounting undergraduate and required Master’s courses feature writing assignments.

Using private and corporate gifts (largely secured by Collins), as well as departmental funds, the program employs a team of writing consultants who meet with students prior to paper submission dates to provide guidance. The consultants also assess for communication objectives and leave feedback for students after the submission date. By applying this feedback from one project to the next, students improve gradually in their writing abilities.

The writing program’s model curriculum initiative is now beginning to take shape in other departments throughout the college, and Tippie accounting students are becoming known—and getting hired—for their communication skills. Reputation building at its best.

Another program that Collins spearheaded is the First Year Scholars program. He secured corporate gifts from the Pella Corporation and Deere & Company in 1997 to launch the scholarship program based on student potential.

Historically, the department and college awarded a substantial number of scholarships to juniors and seniors with outstanding academic records. Aiming to attract promising young students interested in accounting, Collins came up with the idea of giving out scholarships to incoming students as a recruitment tool.

The first year, 13 scholarships were awarded. As a group, they maintained a 3.7 GPA in high school, scored an average of 28 on the
ACT exam (90th percentile), were active in many extra-curricular activities, and graduated in the top 15% of their class.

Click here to see how the investment panned out—spoiler, it was a huge success, with several C-suite executives among the group.

And it wasn’t a one-time thing. For the past twenty-five years, the scholarships have launched the next generation of accountants and executives.The program has now awarded more than 300 student scholarships and has been an irrefutable success.

Much of Collins’ 45-year career was spent building the Iowa accounting Ph.D. program’s national status and reputation. Since the 1970s, Collins has ceaselessly been an advocate for the program and catalyst for its excellence.

Importantly, Collins excelled as much at fundraising as he did at educating and mentoring his students.

He was passionate about hiring top-flight faculty, an enthusiasm he shared with Henry B. Tippie (BSC49). The two shared a memorable professor, Gil Maynard, and agreed on the compounding effect an excellent professor could have—hire a great faculty member and influence generations!

Collins also deeply cared about supporting doctoral students. So much so that when his wife Mary passed away in 2003 from breast
cancer, Collins established The Dan and Mary Collins Accounting Ph.D. Fellowship Fund, to which he has personally made significant donations. And he didn’t just offer financial and academic support. He often treated Ph.D. students like family.

“Many of the doctoral students are international students, and I was one of those,” said Paul Hribar (PhD00), the current graduate program director. “When you move here, you don’t know too many people, and what amazed me most about Dan and Mary was how much they really adopted the Ph.D. students.”

“He took the time to meet my mom and sisters and comforted them with the care he showed for me,” remembers S.P. Kothari (PhD86), MIT professor and former chief economist and director at the SEC who came from India for his doctoral education. “They felt assured that I had a family thousands of miles away from them.”

Collins’ efforts—large and small—have certainly paid off. The program is well-ranked and his influence as an academic mentor is truly far-reaching. His Ph.D. mentees have gone on to become professors and deans at prestigious universities across the country, as well as countless more that have made it to the top echelons of industry.

As current department chair Cristi Gleason said in Collins’ retirement tribute video, “It was really strange to watch him clean out his office and to throw out decades of books and papers.”

“But his legacy isn’t in those books and papers,” she said. “It is in the scholars around the world that he’s trained and in whom he’s instilled his values.” 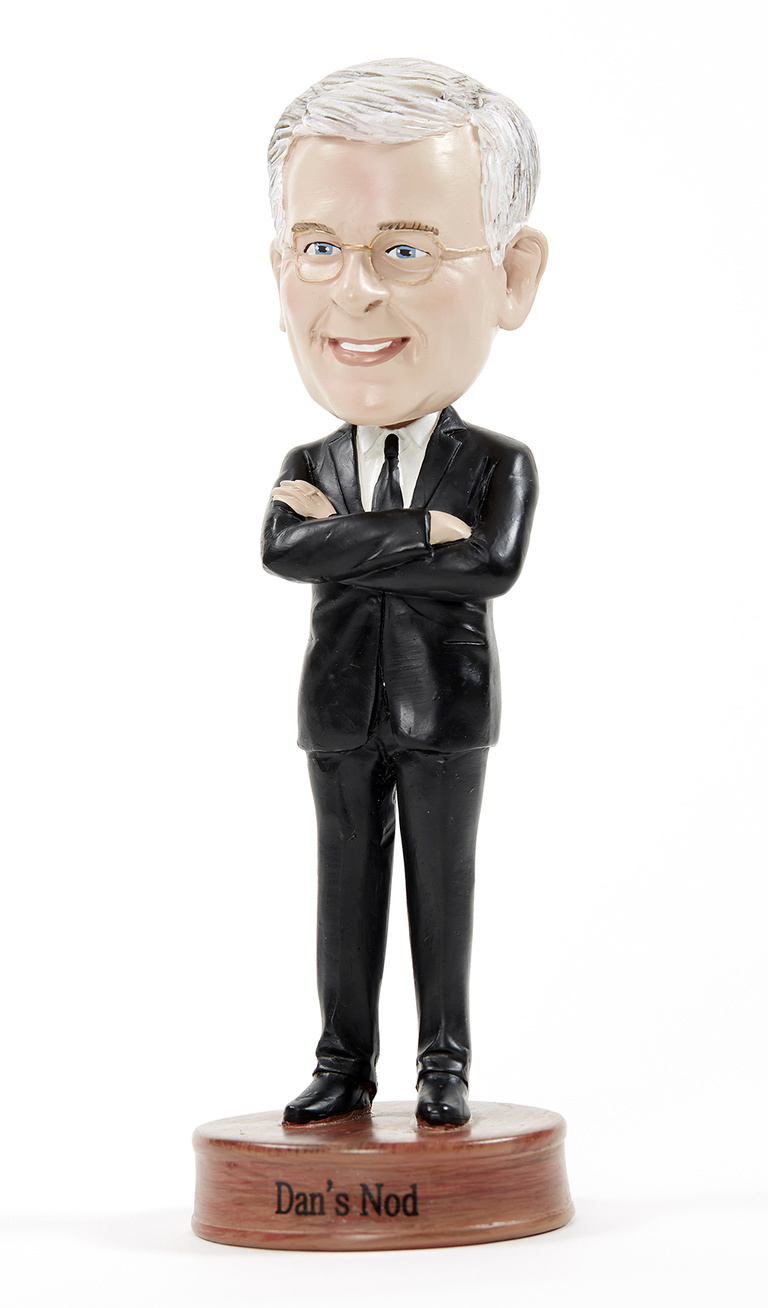 Everyone has a Dan story

"This is the custom-made bobblehead the doctoral students in my cohort made of Dan’s ‘nod’ (of approval), which is widely sought after. Dan frequently nods in approval when he is following along and agreeing with a speaker, particularly in workshop. The student with the best workshop comment each week got to keep the trophy.”
— JANE Z. SONG (PhD18), Assistant Professor of Accounting, University of Georgia

The tradition continued until his retirement!

"I was a student of Professor Collins in the 70s, early in his career. Over 40 years later, I recall those classes as among the most challenging of my higher education. I also recall Professor Collins as one of the best teachers.”
— JONATHAN H. BOGAARD (BBA78/MA81/JD81), Bogaard Law, LLC

“I took Dan’s Intermediate Accounting Class 6A132—and I’ll never ever forget it until the day I die. On the first day he said, ‘I always put a twist into things.’ And he sure did, but it was a great class. I still use those theories to this day.”
CHRIS COX (BBA89), Senior Vice President & CAO, AMC Entertainment Holding, Inc.

"I got to know Dan very well when he was in the MAc program and I was in the PhD program way back in 1967. Dan, myself, and  another Ph.D. student, Fred Sterling, started jogging together to keep fit. All three of us were quite pleased with our running progress. The interesting thing about Dan’s running at that time was that, unlike Fred and I who ran in typical running shoes, Dan ran in combat boots and still set the pace for us! Dan always excelled in everything he did.”
— GARY HOLSTRUM (PhD70)

"I graded papers for Dan. It was my senior year and I don’t remember much about it except that I thought Dan was very handsome.”
— MARIE (GRUNEWALD) DARBY (BBA69)

"I met Dan Collins in 1979. He was my professor for Intro to Accounting and many other classes over the next three years. Back then I wasn’t the greatest student and Dan was all business—a full agenda with no wasted time in the classroom. Those piercing eyes and dry sense of humor; my brain was always exhausted after each class.”
— BOB ARZBAECHER (BBA82), Retired chairman and CEO, Actuant Corporation

"I’ve had a blessed life, and a lot of it is because of Dan.”
— KAY HEGARTY (BBA80), Associate Professor of Instruction, Retired partner, RSM
Hegarty and her husband, John, honored Collins through the creation of the Kay and John Hegarty Accounting Faculty Excellence Fund in 2020.

“Congratulations, Dan, on your prestigious award and your amazing career! You set the model for me, and countless other of your students, of what it means to be a professor.”
—EDWARD L. MAYDEW (PhD93), David E. Hoffman Distinguished Professor of Accounting, The University of North Carolina at Chapel Hill

“Dan was my dissertation chair. I remember all his comments on my dissertation drafts over the last year of the program as I made countless revisions. I began to fear I would never get it right, but Dan’s comments were always kind and invariable on-point. Finally, the day came, and I graduated. Thanks to Dan’s guidance and the excellent education I received from him and many others at Iowa, I had a long and successful career at the University of Oklahoma as an accounting professor, director of the Steed School of Accounting, and associate dean of the Michael F. Price College of Business until retired in 2020.”
—FRANCES AYRES (MAc76/PhD82), Professor Emeritus, The University of Oklahoma (Dan’s first Ph.D. mentee!)

“Dan and I graduated from Marshalltown High School in 1964, and we both played baseball for Marshalltown Community College before we were roommates at the University of Iowa. It was around then that I christened Dan with the nickname ‘booker’ because he was always studying and ‘booking.’ It obviously paid off!”
—JIM WOLFE (BSPH70)

“Dan epitomizes the true meaning of leader, teacher, and counselor and his demeanor is that of a true gentleman.  Dan, thank you, for changing the lives of so many students over the years and thank for all that you taught me, as well, during my time at the Tippie College of Business. Congratulations on this next chapter of your life!”

“What a career!  Hope the transition will be seamless and lead to many years of fun, health, and happiness.”
—STEVE AND BARB COLLINS

Thank you to everyone that sent in stories about Dan for this story! They were all shared with him.

This article appeared in the 2022 issue of Iowa Ledger.